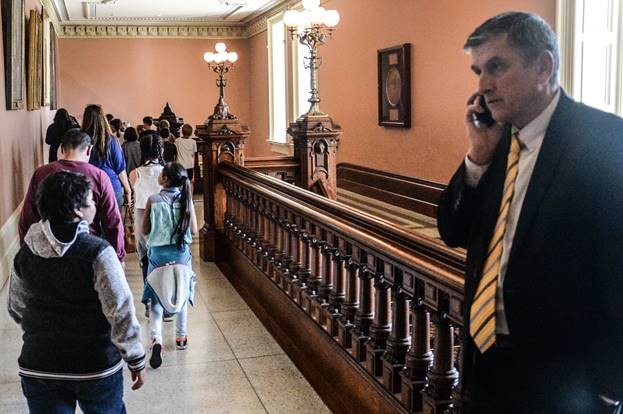 CTA President Eric Heins (at right) engages in a pro-education coalition phone call during a break in the action at the state Capitol.

During the last seven months the California Teachers Association has scored multiple legal victories in Bain vs CTA, Friedrichs vs CTA, and Vergara vs CTA that mark a shift in the labor battle and could spark union resurgence across the U.S.

In Bain vs CTA, four teachers sued to demand they wanted to participate in union voting despite not being members. The Federal Court dismissed the case stating it was without merit and stated no viable legal claims. The Court’s decision came just days after it heard argument on the union defendants’ motion for dismissal.

“The judgment is affirmed by an equally divided Court.” That brief nine-word opinion written on March 29 by the U.S. Supreme Court would stand in contrast to over four years of political and legal maneuvering and be decided by an untimely death on the highest court. That “…equally divided Court” would leave standing nearly four decades of precedent and sound law that has worked for public employers and working people.

Little over two weeks later, in mid-April, Vergara vs CTA would be unanimously overturned by a California Appeals Court in Los Angeles. The three justice panel’s unanimous appellate opinion was a stinging rebuke to Judge Rolf M. Treu’s poorly-reasoned initial ruling, and to the allegations made and millions of dollars spent by wealthy anti-union “education reformers” to bypass voters, parents, and the legislature with harmful education policy changes. The reversal affirmed the arguments of educators, civil rights groups, legal scholars and education policy experts that the state statutes affirming educator rights do not harm students.

This series of significant state and national legal victories by CTA has reinforced national labor law under direct assault. Special interests in states that do not embrace right-to-work laws may think twice about investing untold sums into legal firms offering the false promise of victory through lawsuit that could not be managed otherwise.