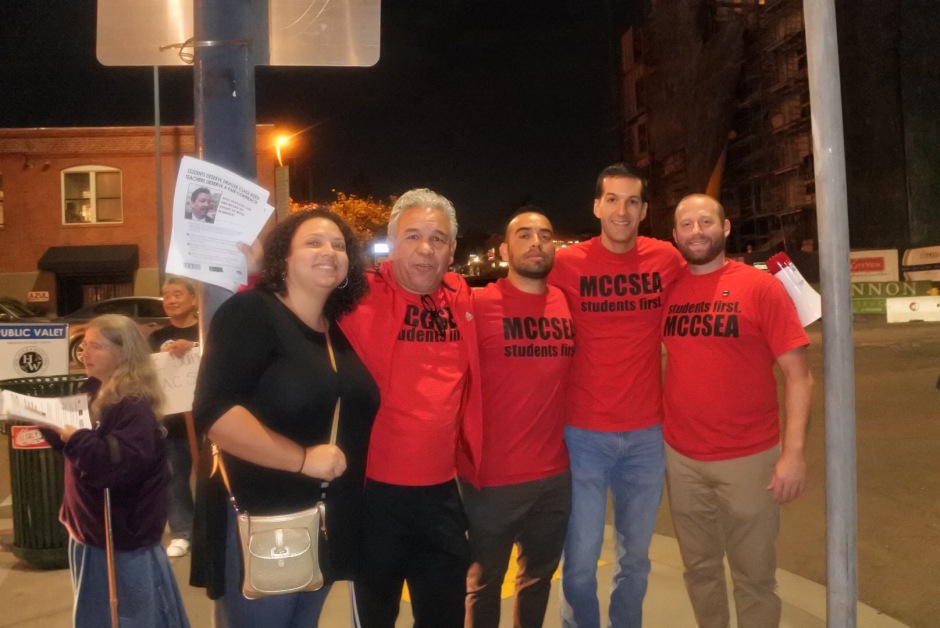 Carrying signs that expressed their longstanding displeasure, Metropolitan Community Charter School Educators Association (MCCSEA) teachers organized and protested outside the annual Metropolitan Area Advisory Community (MAAC) fundraiser In downtown San Diego demanding an end to the stalemate and the completion of negotiations that would finally culminate in a contract between MAAC and MCCSEA .

The high turnover rate and lack of competitive pay, were two issues that led to the local union, MCCSEA, just two years ago. These educators teach MAAC students every day and are committed to the mission of the school. They believe the high staff turnover rate makes it difficult to build a culture and climate of consistency that nurtures children’s natural curiosity to learn and grow.

Six-year MAAC Charter school teacher and rally attendee Jon Abu-Saba was convinced their evening efforts had an important impact; “The rally, I feel, was a turning point for us. Perhaps MAAC executives are starting to grasp how hypocritical their behaviors have been regarding bargaining.”

Another MCCSEA member, Luis Duarte, was energized by the community interest in the protest. “I was amazed about the support from other union members. Donors attending the Gala were made aware of what is really happening with our teachers, and that is in our favor.”

Thursday’s rally at the Annual MAAC Gala is part of an ongoing effort to improve the standards that will ensure a qualified educator in every classroom. Educators believe by fighting for fair wages and benefits, it can build a staff of committed teachers who will stay at the charter and help to encourage the next generation of educators.

California Teachers Association (CTA) board member Roberto Rodriguez, who joined the protest, explained how the teacher shortage is impacting private charters specifically. “With teacher salaries in public schools still significantly higher than charters, only competitive charter pay will level the playing field and ensure quality teachers in every classroom.”

Under current conditions, MAAC Charter is competing for the best educators in San Diego, yet its compensation structure makes it increasingly difficult to hire after more qualified candidates are absorbed by districts willing to pay the prevailing teacher wage.

To continue successfully MAAC must follow through on its priorities to retain and recruit qualified educators by offering comparable pay and benefits, maintaining smaller class sizes, and ensuring a safe school climate.