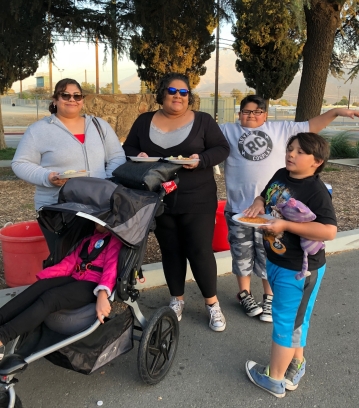 Banning Teachers Association (BTA) sponsored a Parent Gathering and Appreciation Event to thank Banning parents for their role in moving the Banning Unified School District (BUSD) to end the three-day long Banning Teachers’ Strike. Banning parents were the “thumb on the scale” forcing district officials to answer hard questions about teacher pay cuts and changes to the instructional day during what was the first strike in Riverside County in 39 years.

In the nearly three months since that strike, Banning teacher-leaders have determined to strengthen the bond that helped encourage a settlement. Banning Teachers Association is developing a plan that includes ongoing engagement with parents and parent groups, along with sponsorship of parent forums and academies where they can learn about district program priorities and expenditures and become better-informed parents and advocates.

At the reception, the community enjoyed prepared Mexican food, while parents received an invitation to BTA’s next community engagement event, the November 29th Civic Academy. The Academy will work as an educational bridge that connects parents by educating and informing them about their rights as parents in BUSD. It will help them to be better-informed advocates for their students.

The intention is to change and strengthen the relationship between BTA and parents by working collaboratively to make all Banning students more successful.

BTA President Anthony Garcia was pleased with the turnout; “These parents understand their power changed the direction of the District back in August. We’re going to help them turn that power into positive change for their students and our classrooms.”