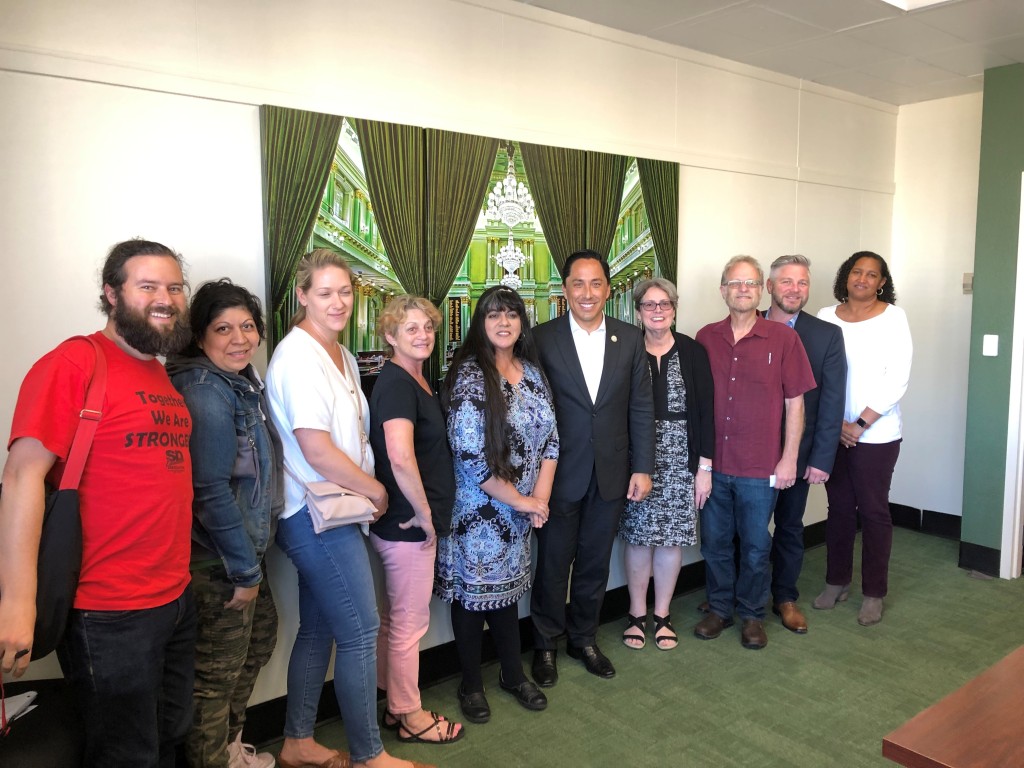 Parents, teachers, and local chapter leaders are frustrated by charter school practices- some on public school campuses- that are causing a loss of school enrichment programs.

78th District California State Assembly Member Todd Gloria listened intently as San Diego parents, educators, and leaders shared stories of how the practice of co-location of charters on existing public school sites had harmed students on those shared sites. Local parents asserted their sense of helplessness; they had no say in the process of creating a separate school on the site boundaries their local public elementary schools. The practice has resulted in the stripping of local control of parents whose children attend those schools.

San Diego parent Ruby Baker recalled the “mission creep” of the new CVLCC High School, a charter school co-located at her child’s school; insisting that parents were told the school would “…occupy a few empty bungalows…” on the edge of the elementary public school campus. Rooms formerly used for enrichment programs and parent volunteers were turned over to the charter operators. She believes they came onto the site deceptively, evidenced by their securing a 7 million dollar loan to build a multi-story charter high school shortly thereafter. Baker noted the lack of concern in placing students disparate in age on a shared campus; “High Schoolers exhibiting typical amorous teenage behavior are left to perform for children because it’s the same site.”

CTA Board Member Barbara Dawson explained how Assembly Bill 1505 would give control back to locally elected school boards to decide whether a charter school is a proper fit for their communities; instead of unelected officials who in some cases are making those decisions from several hundred miles away. AB 1505 is one of four charter school accountability bills currently under consideration in the legislature.

Under AB 1505, local district officials would be able to consider the fiscal impact of the charter when authorizing it. This is especially critical for larger school districts like LAUSD, where the unchecked growth of charters drains more than $600 million from neighborhood public schools.

San Diego Unified School District (SDUSD) is one such district, and San Diego Education Association (SDEA) President Keisha Borden expressed her belief that giving the power to consider fiscal impact could have prevented financial encroachment that has cost millions upon millions of ongoing revenue loss to SDUSD.

Assembly Member Gloria agreed that school districts should absolutely have the right to consider financial impact and expressed surprise in his earlier review of charter school law; explaining that maintaining financial stability is a duty of public office. That responsibility weighs heavily on a school district’s need to consider the impact before approving a charter.

Parents consistently complain that charter schools also do not provide appropriate special needs services. Vanessa Aguirre, a former parent at The Learning Choice Academy (TLC), decided to enroll her special needs daughter at the charter for more “hands-on, project-based learning”, and immediately noticed the lack of resources for her child. When she confronted the issue, she was told was by the school managers that; “You’re not a good fit at our school.” This type of “quiet culling” of special needs students from charter schools is a common occurrence.

Parents, advocates, and supporters of charter school accountability were pleased that Assembly Member Gloria understood the importance of local control and expressed mutual concern about the fiscal impacts of unregulated charter school expansion.